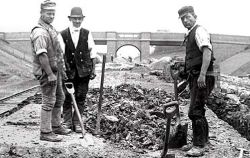 Please find below a copy of the advance works notification detailing the upcoming works Fusion, EKFB and Western Power Distribution will be undertaking along Addison Road from the 8 February to 12 February 2021. Addison Road will be closed from 8am till 6pm where the local diversion route will be in place. Outside of these times Addison Road will be open as normal.

You can contact the HS2 Helpdesk team all day, every day of the year on:

Martin Tett, Leader of Buckinghamshire Council, has written to the Chairman of the Government’s Transport Select Committee (TSC) about the lack of effective monitoring HS2 Limited does of its works and contractors in Buckinghamshire.

Martin said: “I urge the Select Committee to insist that HS2 Ltd and its contractors do as they said they would when they set out their proposals to Parliament. Faced with the delivery phase of this unwanted project, the least we should expect is considerate, well communicated implementation. However, despite the assurances from HS2 that they will be a “good neighbour” we are not currently experiencing that. Instead HS2 issues are diverting tax-payers’ resources away from delivering vital services during a pandemic, as we are having to deal with countless local issues which are caused, and not adequately addressed, by HS2 Ltd and its contractors.

The Council has historically opposed the HS2 project and continues to do so for many valid reasons. It dissects the county and provides no tangible benefits to Buckinghamshire. We have all the dis-benefits of a large-scale construction project and none of the benefits, with the damage being done to our environment and the visual impact completely irreversible.”

At the meeting of the TSC on 6 January, it’s second six monthly oral evidence session on the progress of HS2, evidence was given by Phil Gaskin, Chairman of Calvert Green Parish Council, an area hugely impacted by HS2. He stated “that there is no quick and simple way of resolving issues with HS2 Ltd.”

Both Greg Smith MP for Buckingham and Mr Gaskin raised the need for independent oversight of the project and suggested the implementation of local sheriff style appointments, to be told by Mark Thurston, HS2’s CEO that these roles were already in existence. No-one has seen these officers in Buckinghamshire.

Councillor Tett added: “On this basis I urge the Select Committee to ensure that there is effective monitoring of the contractors and HS2 Ltd’s decisions to implement the project differently to the proposals set out to Parliament, and for Buckinghamshire Council to be appropriately re-imbursed for the additional pressures which the project implementation is putting on the authority.”